Another exciting trip to Ghana is in the books. Along with Dan and I, the team was Ron and Diane Phillips and Kent and Cindy Lupton. What a great group to travel with! God really worked on our patience as we had many instances of things that didn’t go as planned or a lack of the comforts we are used to.

The children are doing well and we were thrilled to welcome a new boy to the Sawla Children’s Home! One of our kids returned to his village about a year ago to live with family, so our count had gone down to 49. After a lengthy battle working with the Social Welfare Ministry and several local officials, we were able to be one of nine children’s homes in the country that received a special registration that was approved by the Parliament of Ghana. (Many orphanages had been closed in Ghana and more than 1000 children in the north were sent back to their villages.) Once that registration was in place, we requested a new child to get our number back up to 50. Kamaldeen arrived at the home just four days before we got there. Praise God! Plans are underway to bring his three siblings to the home as well. 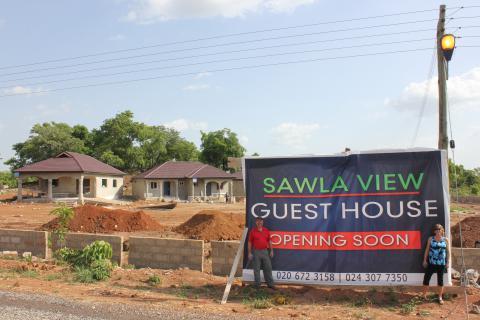 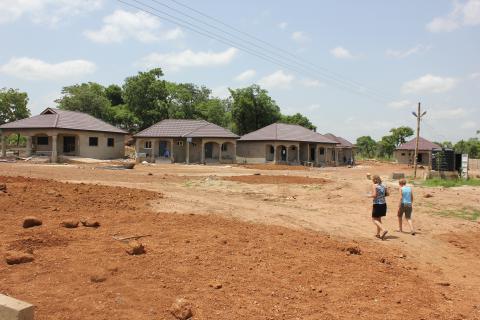 Once again, we were amazed to see the progress on the Sawla View Guesthouse. Moses and the crew are building a really beautiful facility. While we were there, there was a lot going on. We had plumbers and electricians finishing up the last of their pipes and wires. The roofing was completed on the last two buildings. There were POP (Plaster of Paris) ceilings going in as well as plastic ceiling tiles in some buildings. Before we arrived, many loads of local gravels were delivered and some were spread with a large grader. The rest of the work had to be done by hand, so we had some young men spreading the gravels by hand to contour the land for drainage. There was a crew constructing the windows onsite and installing them. We had a fun afternoon where most of our boys from the home came over to clean the burglar bars so the windows could be installed. They made a competition out of it and had a lot of fun while they were working. We were able to meet with the Country Director for the Solar Farm project that will start construction soon. (This will be the second largest Solar Farm in Africa.) They want to rent all rooms we have completed for the next 6-8 months. We finalized many of the details and were happy to hear that their start date has been delayed until sometime in June. That helps us as it gives us another month to get rooms ready. This will be a great way to open the guesthouse and train our staff. We thank you all for your continued support and prayers!